Of all the fake ghost hunting shows, Ghost Adventures probably qualifies as the most annoying.

Hosted by the ever-preening Zak Bagans, a film school graduate with a penchant for horridly overwrought prose like "When darkness falls, we chase the darkness." He must write the stuff himself because he delivers each painful line as though he is reading from scripture. 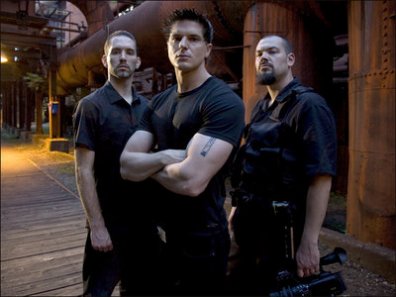 Zak is also one of the world's worst actors, which is a shame since he does a lot of acting in each show. He approaches each case with an absurd tough guy act, constantly challenging ghosts: "Bring it on." Zak loves to gesture, pro wrestling-style, putting his hands right into our faces when he is trying to make a worthless point. It all comes across as trying just a little bit too hard.

Zak often interviews people who have claim some experience on the site. His outrageously leading questions sometimes make even the interviewees squirm. Of course, like all the other shows, the events described as occurring on the sites vastly outstrip what the ghost hunters actually find. We hear of full body apparitions, glowing eyes, spectral faces, etc., etc. But never, never is anything like that ever actually found by Zak or his team. Sometimes the best he can manage is to feel cold spots, or spectral touches. These allow him to really stretch out his acting skills, to great comedic effect. He also often presents the standard lame EVP's, dubious door slams, and unclear images.

Like many of the shows, recreated images and sounds are mixed in with the "real" stuff, making it impossible to determine what is being presented as "evidence". We can see the heavy ham hands of the producers as they try to wring out the maximum oooga booga for their indiscriminate audience.

Ghost Adventures also uses tons of dubious gadgets (see my Bag of Tricks article for some examples). Since none of the little electronic boxes are documented or explained, I view all of them with great suspicion. As I documented, one of their gadgets was just a cheap flashlight.

Some questionable stuff from a recent show, set at an abandoned prison:

• Batteries were drained "instantly" from the wireless mics but NEVER from the cameras (then there would be nothing for the show!). There was some priceless overacting "What? What?...I just put new batteries in 5 minutes ago!"

• The crew claimed then claimed that the audio for the on-board camera mics went out, too. It's hard to prove that they are lying but I would be willing to bet that they simply turned down the input for the drama. It is too convenient that the video never went out. The whole incident had all the earmarks of  prearranged corny dramatic stunt.

• A supposed mist was shown behind Zak that was obviously just a reflection in the low quality night vision image.

Ghost Adventures is an example of lowest common denominator TV, cheap, dumb and patently false. The silly host makes this one particularly loathsome.

Not A Ghost.com Grade: F