The Bag of Tricks
Ghost Adventures, a Kindly Review

For the past month, Syfy has advertised the return of GHI and their spectacular search for Hitler's ghost. The promos promised "definitive" and "concrete" evidence. They got me so hyped up that I was halfway expecting them to find Hitler's brain in jar, barking out plans for a new world order.

Did the team deliver? Well, they did deliver something...

The entire show depended upon an idiotic premise. Let me ask you a quick question: If you were searching for Hitler's ghost, on what continent might you start your search? 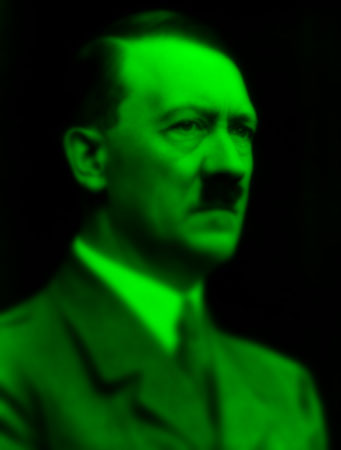 Yes, not only are the ghost hunting nitwits clueless when it comes to gathering real evidence, their historical knowledge is limited to about a 3rd grade level.

The team decided to accept the incredibly dubious conspiracy theory that Hitler survived WWII and hid out in an Argentinian hotel, a hotel that his ghost stills haunts today. I am surprised they didn't spend any time looking for Kennedy while they were there.

Their contact in Argentina told of a recent photo that purportedly showed Hitler looking out of one of the windows of the hotel. It sounded like a great and compelling bit of evidence. I say it sounded that way since we never got a chance to look at the photo. The GHI apparently never saw it either but, in their typical silly fashion, they accepted it as convincing evidence.

So anyway, even though they may have looked in a dumb place and accepted evidence sight unseen, maybe they still managed to find something paranormal, right?

One of the funniest things about the program was watching the different teams as they called out to Hitler, seemingly at the same time! Perhaps Hitler was trying to materialize one place but kept getting interrupted by a team member in another room: "Hey, Hitler, this is Bob, can you bang on something in here?"

Equally funny was hearing the team members speak with the former German dictator in an paranormal slacker dialect, all in English with the occasional German word (drawn from the full vocabulary of Hogan's Heroes) thrown in. "Ist der Furher hier?"

This show featured a new gadget, a remote controlled toy tank equipped with cameras and other sensors. They sent the tank into a crawl space where it promptly got stuck. Later, during the analysis of "evidence," one of the team thought they heard something unusual from the tank. Fortunately no one else on the team was so dumb that they thought a whining sound coming from a toy tank that is loaded with servos and motors was likely paranormal. 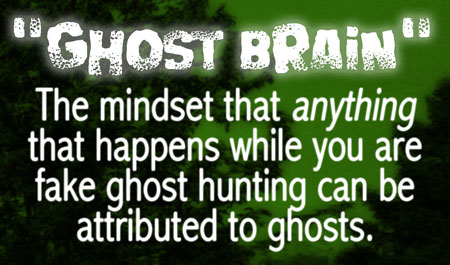 A classic case of ghost brain, occured when two team members  heard something in the room above them. They rushed up and threw open a door, only to have several birds fly out past them in flurry of wings admidst screams from the team members. Then, believe it or not, the scientific investigators went into the room and proclaimed that there was nothing there that could have made the sound. I thought I even heard the birds laughing at that one!

It had already become clear that nothing concrete or definitive was going to be revealed by the time the crew showed their main piece of evidence: a grainy image with lots of lights reflecting into the camera which they said showed a ghost sitting at the edge of a bed. When they helpfully circled the figure (since it was completely indiscernible without assistance), it looked sort of like the shape of the film character, E.T., but was obviously just shadows and light reflections. It was sad.

As the crew packed up their equipment, I noticed not one iota of embarrassment, not a hint that any of them realized how silly they looked. It must take a thick skin to be a pretend ghost hunter on TV. That, or an astounding lack of intelligence.