The Bag of Tricks

Ghost hucksters use a variety techniques and technologies to produce their dubious results. You can't be a fake ghost hunter on TV unless you know how to thoroughly misuse these tools:

For some reason, all of the ghost shows insist on turning off the lights during their "investigations". Perhaps the spirits prefer darkness or more likely the producers know that they need something to 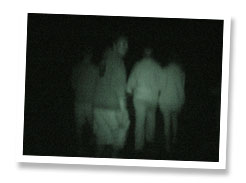 increase the drama of what is basically a bunch of folks sitting in a room while nothing happens. The green-hued night-vision cameras make everything look a little creepy, especially the investigators.

As we will see, what is mainly needed in the ghost selling business is uncertainty. It's the same principle as when a child sees the shape of a dragon in the clouds. Crisp, clear images won't work for ghost hunting, you need grainy, dark video so that the slightest shadow, reflection or speck of dust can be claimed as paranormal.

And even though all of the ghost teams seem to have a huge number of cameras recording their activity, it is depressingly common for one of the team members to point out some paranormal event that is just out range of their lenses. Indeed, most of the time the cameras seem to be trained on the team members themselves as they sit around crudely demanding that the ghosts do this or do that as though they are speaking to trained monkeys instead of the dearly departed.

Electronic Voice Phenomena or EVP is really the workhorse of ghost hunters. All of the shows use this one tool to provide the bulk of what they present as paranormal evidence. In plain language, EVP is just an audio recording that seems to contain spoken words or other interesting sounds. The EVP sounds are often unheard at the time of the recording.

The trick is that the recordings always contain a lot of white noise: the natural presence of a room or building (often called "room tone" in the film business) as well as the inevitable sounds of the ghost hunting team tramping around. It is in this noise (which is often turned up very loud to reveal more "detail" and thus more noise) that the hucksters find the uncertainty they need to ply their trade.

Another contributing factor is that the shows often use the lowest quality of digital recording equipment. In this day and age, there are very high quality portable recording devices. I own a little recorder called the Edirol R-09 that produces amazing quality audio. A quick look at some of the handheld recorders that the hucksters use indicates that the cheapest brands are employed, devices that undoubtedly produce a compressed and noise-filled signal. And I suspect that this is exactly what is desired.

Considering the uncontrolled nature of the investigations, the actual sounds could be anything: a voice from outside the building or from one of the other team members (infuriatingly, most of the teams split up and we are never quite sure where the other guys might be). On a recent Ghost Adventures show, the investigators made a big deal about a hissing sound they heard in a recording but the accompanying video clearly showed that the sound came from another crew member as he inhaled. Needless to say, this evidence went unnoticed by anyone on the crack team.

In most cases, the EVPs are quite unintelligible, just vague sounds with nothing distinctive, so the hucksters helpfully display text on the screen as the sound is played back over and over, a psychological technique, designed to make the audience believe that they are hearing what the producers want them to hear.

On a recent episode of Ghost Lab, the folly of this technique was hilariously revealed when the team found a snippet of audio that they all agreed said something like "I am John Wilkes Booth." The meaty hosts were high-fiving each other over their paranormal prowess. This was a slam dunk! They sent the audio to an "expert" who confirmed that he heard something in the snippet.  But when they breathlessly asked him to confirm the "Booth" statement, the expert admitted he couldn't really hear anything intelligible. I would bet that this kind of embarrassing mistake won't be made again on that show!

It's hard to say what the hucksters are trying to sell us with EMF detectors. They walk around with the units and get excited whenever the readings change. The truth is that a building filled with electrical wires and devices is going to have EMFs (especially considering all the cheap, consumer-grade gear that the hucksters drag into the location). By moving around, the ghost hunters are actually insuring that the readings will change. To the hunter, this means something. To someone who is not tragically gullible, it means little.

Again, we have a technology that has been hijacked by the hucksters to prove something. What they are trying to prove is pretty hazy. Thermographic cameras pick up the heat value of the objects they record. But it is tricky to get to the bottom of just what might have caused any heat in a given location. The ghost hunters try to pretend that their locations are scientifically controlled. But video available on YouTube clearly shows that crew members wander around all over the place (and, comically, sometimes directly into an ongoing investigation scene). There can also be other ways to contaminate a scene with heat: animals can be on the site, electrical devices can be warm from use, or perhaps the furnace is blowing on one area more than another. Regardless of the source, calling a heat signature "paranormal" has no scientific validity. Hilariously, the show, Ghost Adventures, has introduced the world to some crazy investigatory devices, previously unknown to science. These devices are unlikely to ever be used by anyone except fake ghost hunters. Who knows where these gadgets really come from but they all depend upon the same uncertainty and randomness principles that are the huckster's stock in trade. In one episode, the host held a box which he said contained a word database that ghosts could manipulate so that words would appear on some silly looking sunglasses he wore. No further explanation is given but sure enough words came out of the device that were sold as paranormal. Another device used on Ghost Adventures is claimed to be something called a Dark Light. An absurd explanation is given about the light penetrating the veil between the living world and the afterlife and attracting ghosts like moths to a flame. After considerable investigation of my own, I can now confirm the mysterious Dark Light is a cheap $17 LED work light from Husky. Check out their own picture (it's the third photo in the slide show) at the Ghost Adventures site and compare it to the one at the right. It does appear that the Ghost Adventures team has placed a handmade label on the light that helpfully reads "Dark Light". Very mysterious!

Psychics and other Experts

When an investigation is running a bit dry on drama, count on the ghost teams to call in a psychic or paranormal expert. These individuals can be counted on to find cold spots or feel presences and to theatrically announce them. The psychic will often have an imaginary conversation with the spirits when they are too darn shy to show up for the cameras. This provides "evidence" when the hucksters can't manage to produce any acceptable stuff (even using their low standards of acceptance). And it is all very exciting!

When all else fails, you can always jump up in fright, make a high-pitched scream or just run like hell. Never mind that the video shows nothing at all. Somewhere there is someone at home who is eating it all up. Such is the refuge of fake TV ghost hunter.