An excellent exposure
The Protocols of Frank Warren

Note that this blog will now cover matters related to the paranormal and skepticism. Just covering TV ghost hunters was a funny idea but hard to pull off with any kind of regularity.

Perhaps in an effort to turn the tables on their tormentors, it is currently in-vogue among paranormal enthusiasts to dismiss skeptics by referring to them as dogmatic disbelievers, hellbent on debunking any paranormal claim, regardless of the evidence.

It's almost as though the believers are saying, "You guys are just as bad as us!"

Logically the argument falls apart when you consider how unequal the two ideas are. For instance, which scenario below is more likely:

1. A believer in the paranormal sees a shadow or a light out of the corner of his eye and thinks for a moment that the fleeting image looked like a ghost. Even though he really didn't get a good look at it, he becomes convinced that he saw an apparition.

2. A skeptic walks into a room only to be greeted by the ghost of a long deceased relative. The image is clear and unambiguous. The ghost speaks to the skeptic and tells him where to find a long lost (and valuable) family heirloom: at the back of a cabinet in the basement. But once the ghost dematerializes, the skeptic (being all skeptical) convinces himself that the event never could have happened.  And he never looks in that cabinet.

The actions of the person described in the first scenario are fairly reasonable, even if the critical thinking skills are not particularly sharp. We can understand and sympathize with that person.

But it seems like you would have to be one stubborn and psychotic individual in the second scenario. From my perspective as a skeptic, it seems unlikely that anyone could really be that hard core. And yet over and over again on paranormal discussion boards we hear that believers think many skeptics are just that bad.

One of the most frequently cited sources for proof of this supposed skeptical bias is the infamous sTARBABY article from Fate Magazine. Many sites present this article as proof that the dreaded skeptics are willing to actually alter data in order to hide paranormal proof. 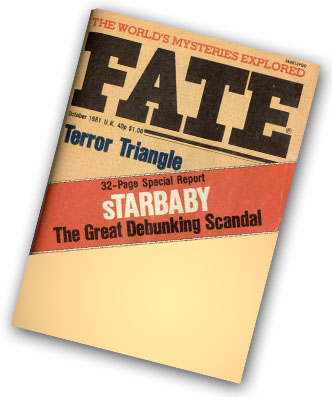 sTARBABY was written in 1981 by Dennis Rawlins one of the founding members of the Committee for the Scientific Investigation of Claims of the Paranormal (CSICOP), the well-known skeptical organization.

Rawlins was asked to help out with one of the committee's first investigations. A French researcher, Michel Gauquelin, published work that seemed to show evidence for something he called The Mars Effect.

What Gauquelin believed he had demonstrated was that the position of the planet, Mars, at one’s birth had a significant effect on whether or not that person became a sports champion.

In other words, it was clear evidence for Astrology.

And when Rawlins examined the Gauquelin’s data, he agreed that the data did show exactly that. But Rawlins says that the other members of CSICOP, particularly leader, Paul Kurtz, freaked out and insisted on publishing rushed, misleading and flawed refutations and obscurations of Gauquelin’s work. In other words CSICOP covered up evidence of the paranormal.

Additionally, Rawlins felt slighted by other members of the Committee for belittling and dismissing his credentials, his contribution and his advice.

Rawlins was extremely angry about it all and things deteriorated from there. Ultimately he was unceremoniously booted off the Committee.

The whole matter is quite complicated and the sTARBABY article itself can be generously described as rambling. I have simplified things greatly in the above overview.

sTARBABY was quickly published by Fate and the magazine gloated about the infighting among the skeptics, calling it “The Great Debunking Scandal”. It became a rallying cry against skepticism.

Here are some examples of how some current pro-paranormal sites describe the skeptics in sTARBABY:

“they fudged their numbers”

“Riddled with a deception so incredible and corrupt, that it begs the question: What is the real agenda of those hiding behind the name of 'skepticism”

CSICOP member, Phil Klass ,wrote a detailed refutation of sTARBABY, pointedly calling it Crybaby. Not surprisingly, Fate refused to publish Klass's work. It remained unpublished but is now widely available on the net.

In reading Rawlins’ and Klass’ works,I come away feeling that Rawlins had been wronged but that he shared some the responsibility for what happened as well. A portion of his complaints amounts to little more than a list of academic pissing contests over who is the smarter or more qualified scientist. And much of the organizational back-stabbing and politics depicted  reminds me of the stuff that happens in all groups, from your mom’s Mah Jong club to the halls of government--and certainly in the sometimes bitter world of academia.

In short, I think Kurtz and CSICOP should have been more forthcoming in their original analysis of Gauquelin’s work and that their effort to hide the results did a lot of harm to skepticism. But I think Rawlins has somewhat overblown the whole matter and overstated the bad intentions of his colleagues.

Indeed, it is eye-opening to know that the evil skeptics who were accused of obscuring  the Mars Effect evidence are the same folks who actually published Gauquelin’s work (in the same issue and uncensored!) in the first place. And Rawlins himself was allowed 6 pages of rebuttal in Skeptical Inquirer.

There is no Mars Effect

But details like that mean little to the paranormal community. Believer sites everywhere distort what happened to make the affair seem something that it was not.  Most of them leave the impression that the Mars Effect is a real and scientifically proven phenomenon and that, in order to hide this, CSICOP fudged the numbers and falsified the data.

“That is not true,” Rawlins told me in a delightful conversation I had with him recently. Nowhere in sTARBABY is there any claim of falsified data. This is an invention of those who support non-scientific beliefs like astrology.

Time has not softened Rawlins’ feeling about CSICOP and particularly Kurtz. Indeed, he feels that what did happen is almost as bad as falsifying the data. “what’s the difference between that and changing the rules?” he asks.

All in all, the sTARBABY affair is a regrettable one. It gives paranormal supporters ammunition against skepticism, ammunition that is predictably bolstered by distortion and falsification.  It's amusing to see the purveyors of superstition lament the accuracy of data, something that seems of little concern to them in their own endeavors.