The Protocols of Frank Warren
Saucers, Lies and Audio Tape

Bigfoot Hunters Expose Their Own Show, Finding Bigfoot in Review 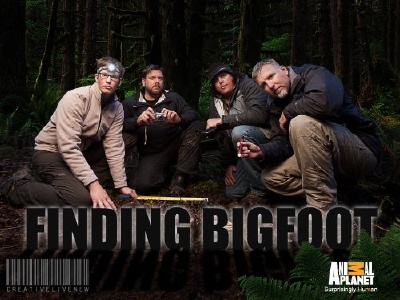 A new paranormal reality show has found some unlikely critics: its own stars. The new Animal Planet show, Finding Bigfoot, is already being debunked by its own on-camera team of Bigfoot hunters.

Finding Bigfoot is designed from the same mold as a TV ghost hunting show with a crack team of Bigfoot "experts" going to different places each week to search for the elusive North American apeman. The team arrives at a location, listens to the stories of the locals and then uses (and often misuses) various technical gear to pretend to find evidence. Each episode features the same tired production techniques of other reality shows: fast cutting, re-creations, night vision footage, sound effects and silly face-mounted cameras to build excitement out of basically nothing.

Is it a bad sign that the official Animal Planet press release for the show refers to the team by first name only? Lesser shows might have soberly discussed the credentials of their scientific team and perhaps even mentioned their last names. But paranormal reality shows don't roll that way so presenting the team members as characters fits right into the spirit of the thing.

The team, Matt, Cliff, Bobo, & Ranae usually attempt to re-create a piece of Bigfoot footage or evidence each time, perhaps imagining that such pointless activity shows a scientific approach or maybe this is just another way to pad out the hour.

Much use is made of a FLIR thermal imaging camera as the team walks around the woods at night looking for a "Squatch" (apparently the producers decided that this term is snappier than "Bigfoot" because everyone on the team uses it in an embarrassingly self-conscious way).

In a recent show, the team stumbled upon an upright figure in a field. The figured showed up very brightly on the FLIR. It was hard to make out just what it was but it looked alive.

The team approached closer and closer and, just as it seemed we might find out what the object was, the producers clumsily cut away from the FLIR image and we are told (but not shown!) that the creature disappeared into the surrounding brush. We lost Bigfoot!

As a viewer, this was a most frustrating experience. Why did they cut away? What was that figure? 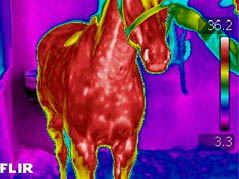 "The heat blip in the meadow was a horse. I said so on camera. I talked about the horse for a good long while. I figured the producers would edit it honestly, but they didn’t. Their editing made it look as though I did not identify the figure before it ran off. I did. It was a horse. They inserted lines from other scenes where I talk about something running away before I could figure out what it was."

Moneymaker, founder of the BFRO, is leader of the Finding Bigfoot team. His statements are a rare revelation from the actual makers of a paranormal show that what they are doing is cynically and completely fake.

In another show Matt is again in the woods viewing things through the FLIR and sees a figure on a hill above him. He takes off yelling and wildly running after it. We see fleeting glimpses of humanoid figure fleeing. Is it Bigfoot? Alas, the creature gets away again. Should the show really be called "Losing Bigfoot?"

After some stilted and manufactured drama in which the team argues with Matt about how wise it is to run off alone after a potential huge hairy unknown creature, Matt ends the argument by saying, "Let's go back and look at the tape." For some reason we viewers are not shown the tape again. Why would that be?

"… the thing I ran after up the hill was a human — someone who was sneaking around us in the woods trying to watch the production in progress. I said so repeatedly and vehemently at the time, for the cameras, but they edited out all of that in order to make it seem unclear what I was chasing after."

Other members of the team also seem to be upset with the way the show came out. In another forum, someone claiming to be Bobo wrote about the show:

"Everything Matt said is true. We’re getting screwed. You people have no idea how much Matt and I fought with the producers to have any legitimacy on this show...Sorry to all of the squatchers that are bummed out on how they’re doing it. I assure it isn’t us."

While it is perfectly reasonable to assume that the producers of this low budget, low ethics show might be willing to fake things to attract more viewers, it should also be said that the Finding Bigfoot team itself shows very little in the way of scientific integrity or know-how.

It's like a perfect storm in which the worst kind of producers meet the most credulous of believers. It's a match made in crackpot heaven.

One obvious example of the team's lack of scientific rigor is how they take take "evidence" that they have gathered from widely separated areas and claim that these unrelated bits of information somehow corroborate and support some other bit of unlikely evidence, a blurry video, for instance.

In one of their superfluous re-creations, the team has Bobo position himself near a stump in order to simulate a supposed "real" Bigfoot video in which Bigfoot steals a candy bar. Using an infrared camera, the team's efforts look exactly like the original video which proves that the figure in that tape must have been man-sized, not Bigfoot-sized.

Undeterred, the team immediately decides that the "Bigfoot" in the original video must have been a baby one. It is obvious that, regardless of their findings, this team is always going see Bigfoot wherever they go. Their theories are unfalsifiable, a sure sign of pseudoscience. Why even do the re-creation if the outcome is already known?

Matt makes unintentionally funny pronouncements over and over on the show. He proclaims that Bigfeet like peanut butter, that Bigfeet like to walk along electrical lines, that Bigfeet hunt and slaughter deer in a certain way. For Matt, Bigfoot exists everywhere and is a known quantity. The only thing Matt lacks is an actual, you know, Bigfoot.

This is all very funny except there is a good possibility that the show received good ratings and thus will return for another season. Matt vows that things will be different if that happens. From what we have seen so far, at least there is nothing that can make this show any worse.