The UFO field has produced more than its fair share of frauds and charlatans. One of the most amusing and yet appalling things about this fact is that, even after exposure, many of these hoaxers are warmly welcomed back into the arms of believers. 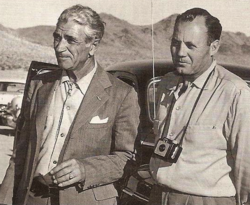 George Adamski (L) and Dan Fry
George Adamski, the UFO contactee, for instance, was outed as a complete fraud in a definitive and devastating exposé published by my friend, Jim Moseley (Saucer News, October 1957). And yet Adamski is still has many apologists. Their rationalizations usually take the form of claiming  that Adamski saw something "real" initially but then hoaxed his later photos and sightings, all for the good cause of fostering fellowship between man and the Space Brothers. Recently, the prolific (and none too picky) paranormal author, Nick Redfern's "Contactees: A History of Alien-human Interaction" treated the claims of many known frauds as serious and worthy of discussion, instead of silly and worthy of laughter. One does what one must in order to sell books, I suppose.

An amusing glimpse of how these con men work was seen when Daniel Fry, another contactee, was publicly deconstructed on a radio program (The Betty Grobley Show, November 1966) by Phillip Klass. In that program, Klass systematically shows that Dr. Fry's claimed PhD came from a "university" that doesn't seem to actually exist. He also got Fry to admit that many of his claimed professional credentials were fraudulent. It is fascinating (and very funny) to hear Fry in action on that program. For instance:

"Understanding" was ironically the name of Fry's metaphysical organization. Despite revelations such as those above, there are still those who think Fry should be taken seriously. Noted UFO author, Timothy Good, in discussing one of Fry's UFO films (the sad saucer is obviously a prop dangling from a string), says this, "But does this prove that Fry was lying about all his previous experiences?  I think not. Most probably, he thought that a few fabricated movie films of 'saucers' would bolster his unprovable claims."

Apparently there is nothing that a UFO huckster might do that would discourage or cause a second thought for the true believer and those who make a living by peddling paranormal ideas.

Recently, I became interested in the claims of respected UFO and paranormal author, Philip J. Imbrogno. Imbrogno has written many paranormal books. Perhaps his best known was the account of the Hudson Valley UFO sightings he co-authored with J. Allen Hynek, Night Siege.

This spring, Imbrogno and his co-author, Rosemary Ellen Guiley, were making the rounds of all the paranormal talk shows to promote their book, The Vengeful Djinn: Unveiling the Hidden Agenda of Genies. I know that the title sounds like a put-on but no, they really were selling a book about vengence seeking genies! I listened to one of Imbrogno's appearances and was struck at how little he had in the way of evidence. This was never an issue on the shows because the last thing any of the hosts of these shows ever ask for is evidence.

Another thing was quite striking about Imbrogno: he was a real scientist. Imbrogno's bio, as it appeared on his web site (and was faithfully recited by most of the radio hosts) partially went like this:

"Imbrogno holds undergraduate and graduate degrees in physics, astronomy and chemistry from the University of Texas and the Massachusetts Institute of Technology. In 2010 he was awarded a Ph.D. in theoretical chemistry from MIT. He is a staff member of the McCarthy Observatory in New Milford, Connecticut, and is a founder and former director of the Astronomical Society Of Greenwich, and former director of the Bowman Observatory." 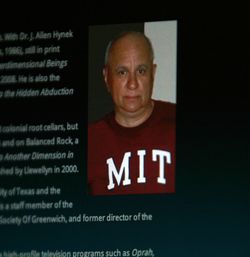 Pretty impressive. From every indication, Imbrogno is an accomplished man of science, certainly a rarity in the more earthy environs of the paranormal.

But one thing was bugging me.

It really started with the shirt.

Many websites carrried a photo of Imbrogno in an MIT T-shirt. A New York Times article about Imbrogno actually mentions him showing up in the shirt.

I started thinking to myself, "Man, he is selling MIT pretty hard!" It seemed a little desperate to me. This was the whole reason I decided to look into the claims of Imbrogno.

I really didn't expect to find anything. I certainly didn't expect to discover anything so easily. Using the Degreeverify.com service, I ran a search to see if I could verify his degree claims with MIT. The results came back negative. I was shocked.

At this point, I still thought that I could have made a mistake in my query (in my first try, I spelled "Philip" with 2 "l's"). I also didn't know how reliable the online search was.

So I contacted the registrar's office at MIT. A very nice lady there helped me and kindly sent me this response: 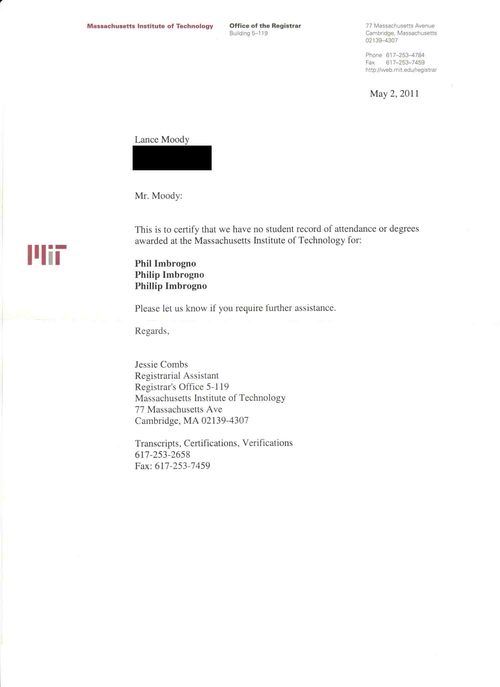 A telephone conversation with the office further determined that there has never been a student with the last name "Imbrogno" attending classes at MIT. Wow. Can it really be that easy?

While I was looking into this, I also contacted several paranormal talk show hosts and personalities to see if they might shed some light on the matter. I wanted to see if there was something I missed. Was I barking up the wrong tree?

Many of these folks initially greeted my inquiries with suspicion. Chris O'Brien, co-host of the Paracast radio program, asked me "Who elected you credentials cop anyway?"

Soon I noticed that Imbrogno's Djinn book web site had been quietly changed. All mention of MIT and other achievements had been removed! In the meantime, I looked into those observatories mentioned in his bio. They both seem to be volunteer-run amateur facilities at a high schools. Phil was on the volunteer staff of one.

One day an announcement appeared at the Djinn site from his co-author, Guiley:

"Philip J. Imbrogno has informed me that he is withdrawing from the paranormal and will no longer be involved in research, including the Djinn.

Soon after, Guiley added another sentence:

"I have ended my research and writing collaboration with him."

I managed to get in touch with Imbrogno to ask him for his response to this matter. His answers to me seemed evasive. He never claimed to have the degrees. Instead he made three bizzare and incompatible excuses.

EXCUSE 1: Other people had mistakenly made the MIT claims not him.

In an email to me, Imbrogno said:

"I don't know why you are after me. There have been multiple mistakes in my background listed, I don't know how but things happen."

EXCUSE 2: He used a second legal name when registered at school.

In any event I register at school with a different name than I write with.

The problem with this is that he uses the name he writes with for everything else. It's the name his phone is listed under and the name he uses at his teaching job. It doesn't make sense that he would have chosen another name JUST for the purpose of going to school. Is it even legal to have two legal names? I don't know. And the reason he gave me for this was strange:

"I respect your work, however the name I  write with is different than the name I use to register for reasons of people in the UFO field trying to track me down."

Huh? I had no problem tracking him down. I just uh, used his name!

EXCUSE 3: He made stuff up about his background in order to confuse UFO stalkers.

This excuse came in a later email after I had told him that I actually had found interviews in which he himself claimed the MIT degrees (which destroys excuse number 1).

"I really have no recollection of saying that if I did It was most likely to secure my privacy...I will often give misleading information about myself to secure my privacy. Once again you will just be going around in circles. I have NEVER given  information out when dealing with UFOs and the paranormal that I can be traced back too because of stalkers. As far as you know I could have a degree in Engineering!. Its because of nut cases that I protect myself and personal information."

I was still undecided about what to do with my information. Imbrogno had threatened me in his emails with legal action (apparently unfamiliar with the 1st amendment) and I was rather satisfied that he had decided to leave the field. I didn't know just what I wanted to do.

In the end, someone else broke the story for me. The Paracast show (and a suddenly more skeptical O'Brien) revealed my findings (without my input and without mentioning my name, naturally) and soon the internet was buzzing about the revelations.

After the story came to light there was much use of hind sight. Lots of folks claimed that they knew all along that Imbrogno's stories were too good to be true. Indeed, I found some threads that did seriously question the tales and Imbrogno's credibility but so many more people wrote about what a fantastic researcher he was and how he was their favorite author, things like that.

I had to listen to lots of terrible podcasts to find Imbrogno making the MIT claim himself. He usually just let the host read the bio and never commented on it. While listening, I certainly wondered why folks believed this man was a great scientist when all I could hear was his sometimes poor grammar and odd pronunciations of words ("A-NOM-A-NA-LY for "anomaly, "CAV-REN" for "cavern", for instance).

Worst of all were the stories.

His stories sounded like poorly written fiction to me. There was a certain aspect to the tales that made them sound as though they were being thought of right off the top of his head. For example, Imbrogno makes much of his association with the esteemed J. Allen Hynek. He mentions Hynek often in interviews and stresses their close relationship. In one story, Imbrogno related Hynek's opinion of the famous Roswell UFO story.

Imbrogno on Hynek and Roswell

I see a big problem with this story and Kevin Randle, probably the foremost expert on Roswell, agrees: the Project Mogul balloon scenario for the Roswell Incident had not been discussed until the mid-1990's. Hynek died in 1986.

Other researchers have since posted their findings about other aspects of the Imbrogno story. They are reporting that they cannot find records of any of his claimed undergraduate degrees. Long-time UFO authority, Don Ecker, says that Imbrogno's claims of service in the US Special Forces also appear to be bogus. There are apparently other revelations in the works.

Sadly and predictably, there are already a few apologists for Imbrogno. A writer at one forum said:

"I think whether he faked his credentials or not is a moot point. There, I've said it. We do indeed have to be careful not to throw the baby out with the bathwater. Just because one element is false does not automatically mean that any other elements are also logically false."

But the vast majority of folks seemed to think that this incident should signal a new way of looking into the claims made by paranormal purveyors, some of them calling for a vetting process before allowing people on the air.

I hope that does happen but, knowing the history of the subject, I certainly have my doubts.

I would like to offer thanks to Angelo Fiorentino, Don Ecker, Ron Collins, Ricky Poole, Kevin Randle, Gene Steinberg and Jeff Ritzmann for their invaluable help in preparing this story.